As we prepare to release the latest recycling rates for steel, it is interesting to note that one of the liveliest discussions at our April event in Brussels, was the discussion around the measurement criteria for recycling rates and the effect of tighter monitoring and reporting rules on the recycling rates reported in member states. 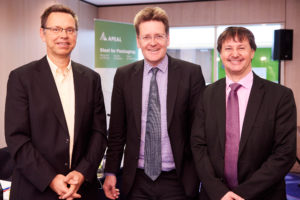 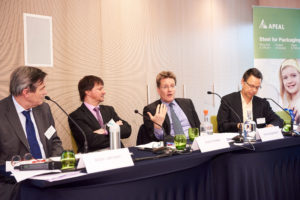 Alain d’Haese, Secretary General FEA European Aerosol Federation, kicked off the third plenary session by calling for a strong dialogue between industry and the EU institutions as the implementation phase unfolds at EU Member State level. He stressed the need for fair and knowledgeable input from industry and qualified APEAL’s event as a good example of the necessary input.

Julius Langendorff, Deputy Head of Unit in the Commission’s DG Environment, presented the key steel provisions in the new legislation, stressing that it’s not only the targets that count but the way they are measured and calculated.

Indeed Geert Bergsma, from CE Delft, pointed out that member states apply the current EU recycling formula in many different ways. The new recycling rate rules, with the same measurement point for all, will be fairer despite resulting in initially lower recycling rates for most countries.

Contrary to some materials that measure the waste that is collected before non-recyclables and impurities are taken out, APEAL’s recycling rate measures “real recycling”, meaning the recovered materials that are actually sent to the recycling plant.

Our recycling statistics have been critically reviewed by an independent third party (energy and waste specialist consultancy, Eunomia) since 2010.

With over 2,7 million tonnes of steel effectively recycled in 2015 and available for the manufacture of new steel products, steel recycling is a real example of the circular economy at work.