We’ve just announced that our latest tinplate Life Cycle Inventory (LCI) dataset has been quality-reviewed and is available online.

Life cycle thinking is vital for the future, and for moving towards a circular economy in Europe, as environmental regulations that only regulate one phase of a product’s life cycle can create unintended consequences such as increased CO2 emissions. 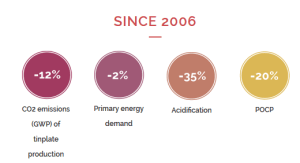 Our LCI creates a clear and universally understandable record of tinplate’s environmental profile over its entire life cycle. The study gives all types of business and brands “the full picture” allowing them to effectively assess the environmental credentials of tinplate packaging and make informed purchasing decisions.

We have been delivering tinplate LCI data since 2006. This latest study was conducted in 2014, using 2012-2013 data from eleven operating sites, following all production steps from the extraction of raw materials to the manufacturing of the coil in a “cradle to gate” analysis.

The results show that the steel for packaging industry has made continuous improvements in environmental performance since 2006: CO2 emissions from tinplate production have decreased by 12%, and primary energy demand has dropped by 2%. The additional impact of steel’s Europe-leading recycling rate is also clearly shown within the profile.  When the 2012 recycling rate of 74% is taken into account, primary energy demand drops by 30% and emissions are reduced by 46%.

The results are yet more evidence of the great sustainability story that steel packaging has to tell – earlier this year we confirmed that a record high of 75% of steel packaging was recycled in 2013.

This success is thanks to a range of factors. Steel’s magnetic nature means it is easier to separate from waste streams. Well-established processes for collecting and recycling steel have existed for many years across Europe. And because steel scrap is an inherent part of the production process for new steel, every single steel plant in Europe is also a recycling plant.

It’s also important to note that the timing of this announcement in view of the Circular Economy Package to be announced early December. The steel packaging sector exemplifies the circular economy as it has closed the material recycling loop and should be used as a shining example to the EU Commission as it introduces new policies in place of the Circular Economy Package.

Whatever these targets are, I am positive that our sector will meet them and continue to lead the way.