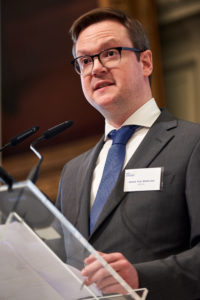 Transforming the 27-country bloc from a high- to a low-carbon economy is ambitious to say the least!

The European Green Deal has been described as ‘Europe’s man on the moon moment’ and the launch of the various building blocks have been highlights for activity in Brussels this year.

One of these key building blocks is the Circular Economy Action Plan (CEAP 2.0), adopted by the European Commission earlier this year. The CEAP defines which packaging materials are fit for a truly circular economy, how to prevent excessive packaging and also contains measures to distinguish between materials that are truly recyclable and those that are merely “greenwashing”. The CEAP 2.0 is also considering reducing the complexity of packaging materials, including the number of materials and polymers used.

Circular by nature, permanent materials such as steel recycle over and over again without loss of quality, and this potential for multiple recycling can contribute to a greener future for Europe. To ensure this is fully recognised in legislation APEAL has, alongside a coalition with the other permanent materials, been actively making recommendations to the European Parliament as it prepares its own-initiative reports on the CEAP2.0, under the responsibility on the ENVI (Environment) committee.

In May, we made a number of proposals for amendments per theme as summarised here.

In October, we made a number of amendments to the draft report of rapporteur MEP Huitema, as detailed here.

When it comes to the EC public consultation initiative on substantiating green claims, we support a legal framework that provides a level playing field and ensures that the environmental impact of the products placed on the EU market, incl. the imported ones, can be properly assessed. You can find our position here.

But fundamental to delivering a circular economy and the European Green Deal, is the European Single Market. Which is why, early September, APEAL was pleased to join 58 other signatories from the packaging value chain, united behind Europen, in a call for the EU Commission and Member States to protect the integrity of Single Market for packaging and packaging goods. The full joint statement and press release can be found here.

Just how steel for packaging can help Europe achieve the ultimate aims of the Green Deal has been summarised in a series of short animations. Choosing steel packaging for its circularity, its recyclability and its climate-neutral potential is one small step for brands and retailers that could mean a giant leap for the European Green Deal.